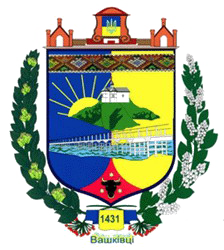 Vashkivtsi (Romanian: Vascauti, German: Waschkautz) - town by the river Cheremosh located in Vyzhnyts'kyy district, Chernivtsi region, Ukraine. First mentioned in the 30-ies of the XV century called Vaskivtsi (most likely comes from the name Vasco). The most famous corner of the foothills of the Carpathians - a Vashkivtsi over Cheremoshem.

Location: Western Ukraine
Recommended visiting season: in Vashkivtsy go during Orthodox holidays on Annino mountain or winter at Malanka
Features: Annino city known for its mountain, which is an Orthodox convent - a place of pilgrimage for many believers of Orthodox people, and celebration Malanka, or even as it is called locally "Pereberiya" (festive dressing).
Must do: Annino climb the mountain to visit the Holy Annino female Orthodox monastery, visit Vashkivtsy on Malanka festival (13-14 January).

Overall Vashkivtsy who flock to Cheremosha known not only in Bukovina, but also in Ukraine and abroad. The greatest wealth of our city - people - beautiful, talented, hardworking, singing. Glorious "Prunus" which spread around the world, was born in vashkivchan - poet and composer Nicholas Yuriychuk Basil Mikhailyuk; patterns of Honored Master of Folk Art of Ukraine George Garas capture still its beauty, you can see the designs in museum-estate the artist, here wrote his poetry Zinovy ??buzzard, worked in Vashkivtsah Ivan Bazhanskyy; statecraft former Canadian Governor General Ramon Hnatyshyn lit vashkivetsku star away overseas. January expensive for residents of the town carols. And ? “Malanka”, affecting the world celebrating Malanka celebration in the context of rituals on the occasion of Old New Year. Beautiful wedding traditions Bukovina can be found in Vashkivtsi. Jaroslav Kuzyk well described in Vashkivtsy his poem.

Documentary mention Vashkivtsy starting with 1431 year. In 1433, the year they were transferred to the Polish king Moldavian state. As part of the Austro-Hungarian Vashkivtsy were from 1775 year, and from 1918 to 1940 and belonged to Romania. Along with its real name, the second half of the nineteenth century for the city name Vaskovtsi odds. Regarding the origin of the names of a few legends. One of them talks about the glorious and courageous boy named Vasco, the other tells people settled in Vyskivtsyah and when we visited a flood of great waters never flooded. There is a legend about the hill on which now stands a beautiful church that during raids by Turks and Tatars lived in the city girl Anna. When the invaders reached Vashkivtsi, Tartar, struck by her beauty and wanted to marry her. Pobihshy to a high hill on which stood a small church, Anna hoped that God would save her. Persecutors overtook her. Rushing to her knees, she asked God to earth dispersed and hid it from thieves. Rozstupyvshys, land took Anna and Tartar vspiv just cut off a piece of girlish braids. But the wind picked up hair from the hand of the enemy and hair brushed across the mountain slopes which since growing rare herbs. Hair dispersed by wind, and herbs that grow on the slopes of the mountains, is popularly called Annino braids. Angry Tartar ordered to set fire to the church. Over time the church was built on the hill, and the legendary site was placed a stone cross.

The city is located 40 minutes by road from the city of Chernivtsi.